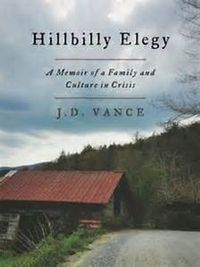 I’ve gone ‘round a few times, debating with myself whether to write this review or to stay with fiction. Fiction is safer and it’s easier to write about because not so much is at stake. At the most fundamental level there can be a lot of fact-checking to do; at a more complicated level (especially these days) there can be a whole political/idealogical level to deal with.

When I went to university in England in the mid-70s, there were the usual bugaboos of racism and sexism and the more complex problem of classism. The virtues of the working class were extolled and qualities pertaining to the middle and upper classes were, if not vilified, then certainly seen as less authentic. My own appreciation of folksong and music from the lower classes and the warm, non-judgmental reception I met with from working-class people in general, led me to a similar affection. At a time in my life when I felt it more important to be judged on my own apparent merits — did I buy my round? could I tell a good joke? could I thrust and parry verbally with the best of them? — all of that meant more to me than people asking me about my ambitions and prospects.

After university in England I came to America and found it confusing. Two things I noticed straight away. There were no small eggs sold in the supermarket — the scale started at medium — and there was no working class. There were ‘the rich’, the ‘middle-class’ and … well … ‘the poor’. It seemed to me that the poor were kind of written off. This, after all, was America and if people were poor it was mostly their own fault. We lived in an aspirational society and these people, for some reason, didn’t aspire to be middle-class. This, of course, was happening in the UK as well. On the death of Margaret Thatcher, the MP Glenda Jackson spoke of the “heinous social, economic and spiritual damage” done by Thatcher’s policies and how the aspirational society was aspirational for things, that greed and selfishness were valued above caring and looking after people. Margaret Thatcher was the one who said, after all, that “there is no such thing as society”. The motto here in the US ran along the lines of “greed is good”.

And so here we are with Vance’s book and the Monday morning quarterbacking of why the Democrats so unexpectedly lost the 2016 presidential election. For some obvious reasons focus has been pointed at rural America and the disaffected people living there. For less obvious reasons a particular focus has been shone on Appalachia and the endemic poverty and social problems to be found there.

Vance declares in ‘Hillbilly Elegy’ that the problem is cultural, not economic and his litany of abusive dysfunction is horrifying. Domestic violence, drug and alcohol addiction and poverty on a major scale are everyday facts of life. People, he says, spend themselves into the poorhouse buying bigscreen TVs, iPads etc.. in an attempt to have the goods of the world — often with credit cards at exorbitant rates. The pointlessness of life leads to all kinds of substance abuse and the problem is perpetuated by a lack of any kind of role models. He, however, was lucky in having the support of his grandparents who were firm believers in education, while all the time being pulled down by an addicted mother and a revolving cast of father figures, almost none of whom had anything to offer. In the end he escapes his old life and ends up graduating from Yale Law. It’s not surprising then, that this book has a strong tone of ‘bootstrappery’ about it — a sense that it’s not the government’s job to make your life better; that you need to get a grip on this and raise yourself up.

A similar examination of the ‘working class white’ problem is discussed in an article posted online by Forzetti: On Rural America: Understanding Isn’t The Problem. In this article particular blame is placed on a rigid, unaccommodating Christian fundamentalism that denies these people the intellectual tools to assess their situation with any clarity and to rid themselves of the fear of a rapidly changing world.

I’m uncomfortable with these (and other similar) analyses. Something is being lost in these communities, something that we may not recognize until it’s gone. I’m not sure what it is, but it seems that a sense of dignity and their own value has been robbed from these people. Hillbilly Elegy is often quite a moving book, and I’m glad of it’s generosity of spirit even while it is merciless in its evaluation of its world. Meanwhile I’m wondering if I have a right to any opinion on all of this. I can hear the catcalls of ’liberal guilt’ and the scoffing at the idea that I know anything about that world or that I have any right to an opinion. But Vance’s book has given me long pause and I’ll be thinking about it for some time.