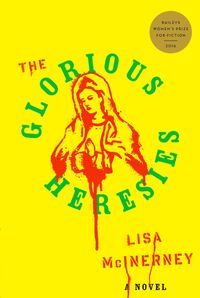 On St. Patrick’s Day this year we played a concert in Scottsbluff, NE and were also asked to do an outreach at the local correctional facility. This was a new departure for us and though we didn’t know what to expect we were eager to try something new and see how our music went down. I remember at the time looking out at our fairly small audience — maybe fifty people — and thinking to myself, “I’m not really sure there are any actually bad people out there.” True, the audience was, in all likelihood, made up of fairly low-level offenders who were well-behaved. Some of the women seemed to show the ravages of meth use and some of the men may have been in for some form of violence and I was pretty sure that harm had been done to innocent people along the way. But I was inclined to believe that what was before me had more to do with lack of living skills, lack of good examples than with evil hearts. I mention all of this because, at the time, I was reminded of this book by Lisa McInerney.

This is a morally complex book with characters ranging from shady to stygian. There’s murder, prostitution, drug-dealing, alcoholism, poverty and yet there’s also redemption on many fronts and for all the moral grime there’s love and honor and something resembling nobility.

The book opens with a mutual seduction scene between fifteen-year-old Ryan and his new girlfriend, Karine D’Arcy. The rush of excitement, the nervousness, the lust and affection are captured perfectly — I was totally won over by the writing from the first page. This relationship between Ryan and Karine is central to the book and proves an enduring and inspiring partnership.

The second chapter details the murder of an intruder into the home of the mother of one of the city’s more brutal crime bosses. The mother, Maureen, barely escaped being placed in a Magdalen Laundry some forty  year earlier and had her son taken away from her. That son, Jimmy Phelan, in mid-life had searched for his mother and found her in London and brought her back to Cork where the action takes place. Maureen views herself as a kind of angel of redemption and does away with the intruder by hitting him over the head with the Holy Stone — a rock painted gaudily with an image of the Virgin, acquired at some shrine. This murder sets in motion a series of events that affects the main characters in the book — Ryan the drug-dealer; Georgie, the teenage prostitute and drug addict who tried to save herself by joining a religious cult; Ryan’s alcoholic father who doesn’t know how to save his son …

While a lot of recent books, it seems, tell their story from multiple viewpoints, this one has one one, omniscient narrator who doesn’t immediately reveal the identity of the person being written about. So, when you think of Ryan’s father as a brutal alcoholic based on Ryan’s thoughts, you then hear the thoughts of a sympathetic character — who turns out to be Ryan’s father. This is not a gimmick, though — more the idea of walking in someone else’s shoes and an illustration of how we can fail to see each other clearly.

The language is a little difficult at times. It can be brutal but is more often wonderfully poetic. It’s also often darkly hilarious. There’s a certain amount of slang that I wasn’t familiar with because slang is always changing and because places such as Cork have some of their own peculiar patois that you may not hear in other parts of Ireland. It’s a delicious read, though and full of aching humanity.