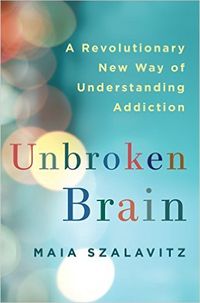 I found this book fascinating. I’m an alcoholic and central to all the mess that surrounds such a condition is a disturbing existential disconnect. I’ve referred to it in the past as “getting out of integrity with oneself” or I’ve explained it as “knowing that there’s a problem but denying that there’s a problem while all the time knowing that denial is just more proof that there’s most definitely a problem”. It’s a very disturbing emotional and intellectual place to be lost in and has been an issue that I’ve pondered for the good many years of my sobriety. I’ve no interest in being defined as a recovering alcoholic but it does give me some insight into addiction and what may be involved in treating it effectively and has certainly helped me to get a better grip on the issue.

The author of the book Unbroken Brain, Maia Szalavitz, gives a much needed re-examination of addiction and its treatment rather than thinking of addiction simply as a disease or as a moral failure. She points out that there is no precise scientific definition of addiction nor any identified common chemical in any substance that can be said to cause addiction. Nor, indeed, is there such a thing as an ‘addictive personality’. Rather, she insists, addiction at root is a learning disorder. "Label addiction as merely biological, psychological, social, or cultural and it cannot be understood; incorporate the importance of learning, context, and development, however, and it all becomes much more explicable and tractable.” She points out that the majority of those who start drinking or taking drugs do not develop a dependency but rather tend to move on from the drugs or learn to drink or consume in moderation. Some 10% - 20% do become addicts and nearly all of those have suffered trauma at some point in their lives. She found herself numbered those figures, acquiring a cocaine and heroin addiction in her 20s that she describes in harrowing detail.

This is not to say that addiction is ‘only’ a learning disorder. Much depends on when the activity starts — to start while the brain is young and still developing adds an elevated level of risk. Trauma, poverty, peer pressure, stress, chemicals and all the usual factors one thinks of as being involved in addiction come into play but as the brain learns to use drugs, alcohol, gambling etc., as a soothing exercise, it cannot just unlearn the practice when negative results are generated.

This was the experience that thoroughly confused me in my days as a drunk. I had finally gotten to the point where I knew that I didn’t want to drink any more but somehow I felt compelled against my own wishes. I stopped drinking at one point and decided to go to an AA meeting. I hated it. It seemed to be a lot of miserable people almost frantically indulging in caffeine, sugar or tobacco — or all three. I never went back. I stayed sober for six months and relapsed. I drank in moderation for a while but the consumption increased. Finally, after a number of years I stopped again and now, some sixteen years later, I’m not interested in booze. But I never went back to AA. The author herself admits that many aspects of AA and the twelve-step program that is the basis for many recovery programs were very helpful to her. But she is also highly critical of its dominance in the recovery world and points out that many other recovery programs based on a more scientific approach have as good, or better, recovery results. She is particularly critical of the AA notion of needing to ‘hit bottom’. I know that I never hit bottom but I did know I was in trouble. As is pointed out in the book each addict may respond to many different treatments but one one-size fits all of AA and related programs and the harsh criminalization on behalf of ‘the war on drugs’ have more of a track record of failure that success. In fact, one of the distinguishing marks of addiction is its resistance to punishment. Instead, a program of harm-reduction has seemed to have the most successful results.

The book is thoroughly researched and remarkably free of jargon. I shall be interested to see what the medical community makes of it but it rang very clearly for me. For maybe the first time it seemed that a clear light was shone on this condition, and many mysteries cleared up. It also made me feel that I no longer had to reconcile the idea of being the victim of a disease while at the same time being a moral failure.

If you have an addiction, or if you know someone who has, I recommend this book. Highly.