I’ve not been keeping up with my reading of late. At least, not with my fiction reading. The pile I want to get to is getting higher all the time and includes books I’ve wanted to read for years. Instead I’ve found myself reading nonfiction and science books. 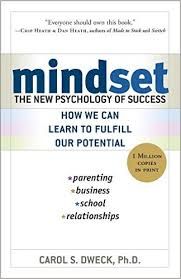 The first of these is Mindset - The New Psychology of Success. I was intrigued when I heard the author, Carol Dweck, speak on a TED RadioHour on NPR. The book is some 240 pages and though it contains a lot of anecdotes of the “Jane was 26 and having a lot of problems at her job” sort, many of these are quite enlightening and help to illustrate the main thesis viz. that telling kids that they’re smart or talented tends to put them in a fixed mindset, a belief that ‘you have it or you don’t’. This makes kids — and adults, too — reluctant to take chances and afraid to try things in case of being caught out as less than they are thought to be. On the other hand, there is a mindset that says ability can be improved through work and practice and can be a source of enjoyment rather than something that needs to be proved. This might seem obvious to most people but, again, one of the advantages of the anecdotes is to see that we may not be as growth-minded as we would like to believe. It’s a fascinating read and one that has illuminated certain parts of my life for the better.

How We Learn by Benedict Carey is also an illuminating book. A couple of the ideas I was already vaguely 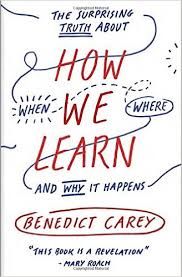 familiar with from works by people such as Tony Buzan — ideas such as repeating learning at timed intervals — but this book is much more in-depth as to the science behind the learning process. Some of the information is counter-intuitive e.g. the old bromide about working in a quiet space, set aside for that purpose, to be worked in at assigned times — is wrong on all counts. We learn better with ‘distractions’ around and when we vary the time and the place of our learning. The ‘learning machine’ that is the brain, is still only barely understood but it’s proving to be very eccentric and quirky instrument — and way smarter than we’d thought. 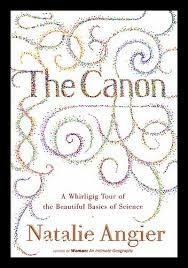 The Canon, a whirligig tour of the beautiful basics of Science, by Natalie Angier has chapters on such topics as Thinking Scientifically, Probabilities, Calibration: playing with scales, Physics, Chemistry etc., each dealing with a different aspect of Science and all mind-boggling. The chapter called Calibration, for instance, examines scale from the tiny, tiny atomic, with its vast distance between objects relative to their size, to the hugeness of the universe — also with it’s vast distances between things. She points out that it’s relatively rare in the scheme of things to have anything much happening on the in-between scale where we happen to exist.

The end of all this, is that the universe is seen as something of exquisite beauty and tantalizing mystery.