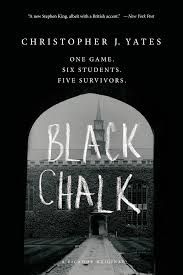 There’s something wrong with this book — or there’s something wrong with me. I say that because there were parts of this book that I really enjoyed but I was perplexed by some of the premises on which the plot is based and by an ending that seemed … lame? pointless? certainly unsatisfying. A blurb from the The New York Post describes the author as “A new Stephen King, albeit with a British accent”. I’m not really conversant with King’s work and my interest in horror fiction ended during high school when science-fiction took my fancy. (I still have fond memories of the frissons of terror attending my explorations of the 13th Pan Book of Horror Stories). And that British accent is really an English accent; shades of The Glittering Prizes or Brideshead Revisited.

The story concerns a group of friends who meet during the first term of university. There’s the brilliant, eccentric, charismatic and probably wealthy main character who holds the group together and, within that group, there’s the mandatory outsider — in this case an American student also attending Pitt College, a fictional branch of Oxford University. There are a couple of young, attractive interesting women and two somewhat overwrought young men — six in all. And as the blurb says — “One game. Six students. Five survivors”.

The premise of the story is that these six best friends invent a game. It involves a mixture of cards and dice, skill and chance — the details are never explained and don’t need to be. The important thing is that the penalty for losing is a series of forfeits that are designed to bring a form of petty humiliation to the loser. Overseeing all this is an increasingly sinister trio from what appears to be a secret society called The Game Soc. Over time, as these friends get to know each other better, the stakes increase and the forfeits become more vicious and very personal. Intriguing premise, I thought.

The book begins some fourteen years after the penultimate round of the game was played. A showdown is looming between the narrator, who is only identified after several chapters and a final opponent also later identified. As the narrator recounts the history of the game we get to know the people involved and the circumstances that lead to the denouement.

Now, here’s the problem for me: I didn’t get it. It’s obvious that any number of people loved this book and found it thrilling — a glowing NPR review was my inspiration for a impulse purchase. Is there a subtlety that I’m missing? Is it my unfamiliarity with the genre? I don’t mind implausibility but I have to want to suspend disbelief and, in this case, I simply wanted to shout “Stop it — that’s not how friends behave!” Friends do, of course, betray friends but for more insidious reasons than winning a game. There is no reason that I can fathom why the game wasn’t stopped when people started getting hurt. And the reason that it had do be resumed after fourteen years and an outright winner declared was even less convincing.

On the other hand, this is a well-written book and at times downright charming. For instance a description of the early stage of the friendship is described thus: “The eighth and final week of term became a time of celebration. The horse-chestnut leaves had fallen and Christmas was coming. Their days were cool and reeled along slowly. Nights buzzed by fast, warm with companionship and the air full of laughter.”  That’s a lovely description and this book is full of elegant and engaging writing but I was frustrated by the unconvincing plot. But, as I’ve said, many people seem to like this book so all I can say is caveat lector.